CodeRedTO welcomes back Christof Spieler, author of “Trains, Buses, People, Second Edition: An Opinionated Atlas of US and Canadian Transit“, to speak with our community September 27th about lessons Toronto and the GTHA could learn from other cities’ experiences. If we want to learn, that is.

Register to join us September 27th at 8pm via Zoom link.
(Use code CODEREDTO2021 for 20% off preorders at SpacingStore.ca and stick around for some “door” prizes!) 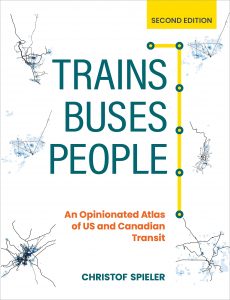 Trains, Buses, People, Second Edition: An Opinionated Atlas of US and Canadian Transit

Christof Spieler is an engineer and planner, a senior lecturer at Rice University in the architecture and engineering schools, and spent eight years on the board of Houston’s Metropolitan Transit Authority of Harris County (METRO). He’s also a member of the American Public Transit Association’s Sustainability and Urban Design Working Group, which drafts national standards on transit and urban design, a contributor to NACTO’s Transit Street Design Guide, a member of the Central Houston Transportation Committee, and a board member at TransitCenter in New York.

Christof Spieler presented at a CodeRedTO event in 2019 and we are thrilled to welcome him back (virtually!) to launch “Trains, Buses, People, Second Edition: An Opinionated Atlas of US and Canadian Transit“, which now covers every rail transit and bus rapid transit system in the United States and Canada!

“For all of their hardcore infrastructure, urban transit networks are essentially human creations, and understanding what makes them successful is essential for building successful cities. Supported by urban histories and incisively presented data, Christof Spieler sets the rules of engagement for effective transit and offers a roadmap for achieving it.” — Janette Sadik-Khan, former NYC Transportation Commissioner

Register to join us September 27th at 8pm via Zoom link.