Toronto has an overly-simple rail network and the lowest overall subsidy (30.4%) in North America, and has no dedicated revenue sources, unlike most peer transit systems both older and younger, which leave our network uniquely vulnerable to political obstruction. 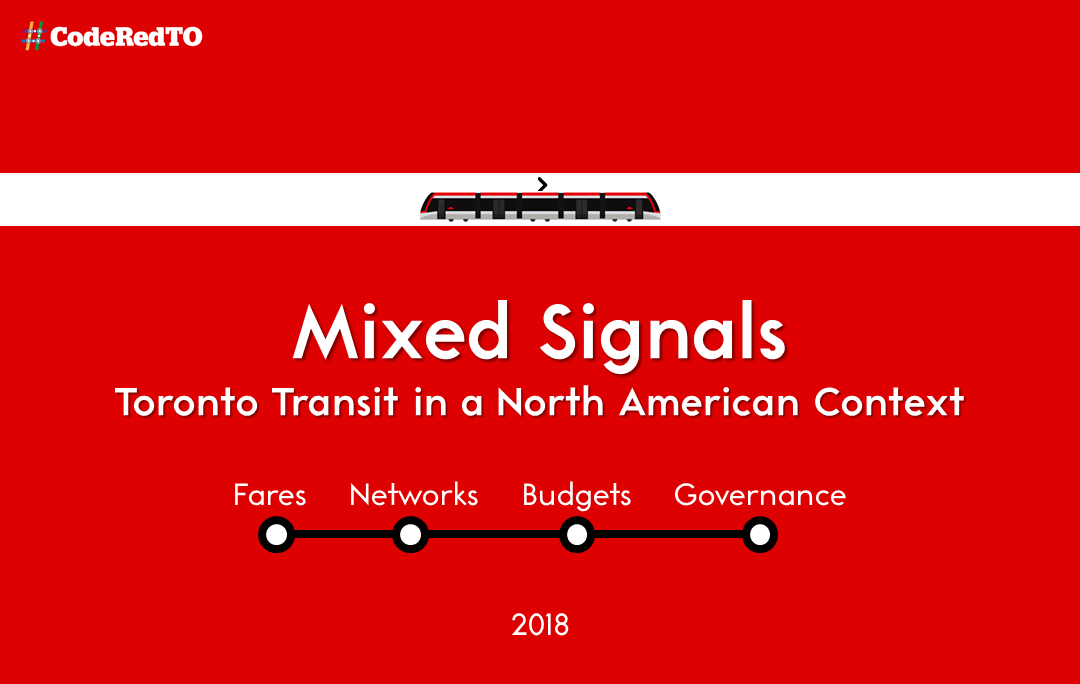 CodeRedTO releases this report after the campaign period to allow both the public and legislators to review meaningful comparator city data at this critical moment, when proposals are circulating from governments and civil society about how to address structural issues affecting transit in the GTHA.

“Toronto and Queen’s Park are proposing change which will not resolve key vulnerabilities in Toronto’s transit: its low level of subsidy and lack of dedicated revenue,” said Cameron MacLeod, Executive Director of CodeRedTO. “Nothing is more crucial than resolving decades of underfunding and poor network design. Tangible increases to service levels, improvements to passes and fares, and funding to build a more complete network all demand our immediate attention.” Patricia Wood, a co-author on the report, added, “Local transit is starved for operations funding in the GTHA. Better governance could help, but a complex ‘upload’ isn’t the answer. Metrolinx needs to be more accountable to the region, and Toronto should be represented on its board.”

Eighteen months in the making, this report brings together research, design, and subject matter expertise from outside transit agency and political party structures, allowing data to be used to inform policy discussions for all.

This report is released under a Creative Commons license, allowing free access to use and adapt its contents in any way, as long as any derivative work is similarly released. This will increase the ability of all transit advocacy groups and interested parties without favour. The report can be downloaded at www.CodeRedTO.com.

CodeRedTO was founded in 2011 as a consciously non-partisan, non-profit, volunteer-run advocate for local and regional public transit. We promote more and better transit options for more residents; using all available technologies where appropriate; creating better information for better decision-making; completion of efficient and approved plans; and increased, predictable funding for public transit expansion and operation. CodeRedTO is funded through personal donations and grants from non-profits, and directed by an advisory board with no financial interest in any transportation projects or agencies. Learn more at www.CodeRedTO.com and follow us @CodeRedTO.